In honor of the Spirit of 76 Museum‘s 50th Anniversary, as well as the end of the special exhibit “Yours Truly, A.M. Willard,” an open house was held Oct. 27 for the public to visit one last time before the museum closed its doors for the season and the paintings, as well as Hugh Mosher’s fife, were returned to the owners.

A total of 99 people attended the event, but a portion of those were more than simply guests coming to visit. Fourteen descendants of Hugh Mosher, spanning three generations, made their way to the Spirit of ’76 Museum to see the original fife, many who had never seen it in person. 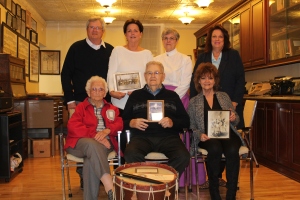 And they weren’t the only descendants in attendance. Members from both the Green and Willard lines gathered at the museum to admire their own ancestors famous items, including the original drum used by Freeman Green when he posed for the “Spirit of ’76” painting, as well as the paintings themselves.

Green’s drum remains at the museum as part of the permanent collection, but many in the family never had the opportunity to see it outside of its showcase.

While the museum will be losing an extraordinary exhibit now that the season is over, it

did gain several exciting additions during the event. The Bicentennial quilt that was raffled off in July was given back to the museum by winner Kathy Auble. Larry Broome donated his hand-drawn family tree dating back to the 1600s, linking his family not only to Myron T. Herrick but also to the Salem Witch Trials and Sarah Good, one of the first women convicted of witchcraft. Larry’s wife, Eleanor, donated a large World War I French poster regarding orphanages. All of the donations were incredible to receive on such a special night for the Spirit of ’76 Museum.

The museum may be closed for the season, but the board is already hard at work preparing new exhibits and displays for next year. We thank all of the wonderful sponsors, donators, and supporters of the museum who came out to help us end our 50th year with such a bang, and we look forward to seeing you next year!